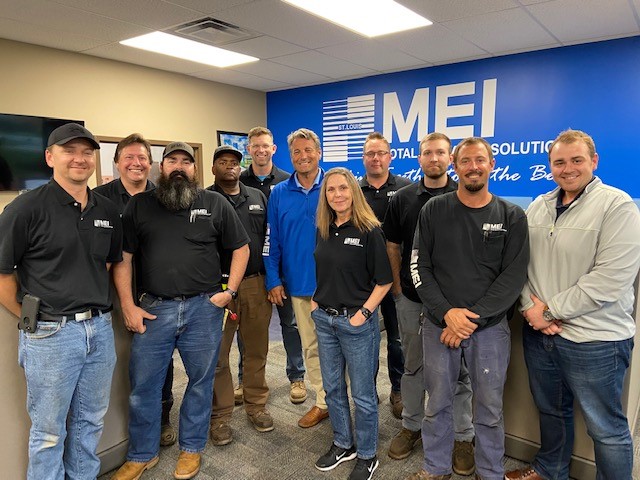 MEI Total Elevator Solutions is a full service elevator contractor located in St. Louis, Missouri. We are experts in the field of elevator maintenance and repair to ensure equipment longevity and provide our customers with high quality service and  workmanship for any situation.

Whether you need an inspection, install or a major elevator modernization project planned out, we’ve got you covered – and our expertise doesn’t end there! MEI Total Elevator Solutions provides new elevator installation services as well. Contact us today to learn more about what we can do for your commercial building’s elevators!

Delivering a great customer experience is a priority at MEI and this is reflected in the relationships we have built with many of our customers over the last 50 years.

School Sisters of Notre Dame in Mankato, MN is one of those loyal customers that has had a great relationship with us, so when we opened a new location in Missouri, we took the opportunity to connect with them at their location in St. Louis.

Branch Manager Chuck Pilz connected with the St. Louis SSND facilities manager to discuss a modernization on a traction passenger that had been originally built in 1888. The elevator was in their Motherhouse and was the only one available to get the Nuns to their sleeping quarters, so the job needed to be completed in a timely fashion.

Because of the relationship MEI had built with SSND over the years, MEI was awarded the project.

This modernization included a new controller from Smartrise, GAL door equipment, Innovation fixtures and we replaced the machine with Hollister Whitney.  MEI also worked with CBI and turned a wood platform that was located inside an attic in to a very nice, efficient, and stylish temperature-controlled room.

When the project was done, SSND Facilities Manager stated, “I spent years working with the same company. As time progressed, issues became more common. We decided to give MEI a shot at a mod project and they blew the competition away. After things went so well on the mod project, it made sense to give them a shot at our maintenance contract. Chuck and the crew have not disappointed us. Our units are up and running smoothly and have never looked better”.

This project was a great example of MEI employees living out our mission of Working Together to be the Best!

The holidays are a time for family and friends to come together to celebrate and enjoy each other’s company. This year though, Christmas was a little different for our mechanics in St. Louis.

At 1am on Christmas morning, Branch Manager Chuck Pilz received a phone call from Council Tower Apartments, a 27-story building in St. Louis that had a water issue. Pilz reached out to the on-call technician to let him know he was going there and would report back with issues. Jon Harrison insisted on meeting him there to help survey the problem.

Upon arrival, they saw that three elevators were down and the cartop equipment was wet. The damage could not be fixed with only one mechanic and being that it was Christmas Day, we were unsure if any other mechanics were available.

Three of our mechanics, Adam Dragovich, Brent Lane and Andy Schmitz were all willing to show up and help get the problem fixed. The morning was spent going to several places to grab replacement parts and other things needed to complete the project.

The mechanics worked together and replaced all the car top boards, door motors and blown switches. Any corroded door interlock equipment was replaced as well. They also went over all the hoistway locks and equipment from the 21-st floor and down.

After spending the first half of Christmas morning with the staff at Council towers, all three elevators were fixed and operational by 10:30am. The staff and residents were very thankful for the hard work performed by the MEI team.

Being there for our customers is a top priority for MEI and this team proved that when they came together and truly were “Working Together to Be The Best”.

Chuck and his MEI team have been fantastic to work with! MEI puts the customer first by offering fair rates, fast response times and by providing necessary preventative maintenance. All of which are extremely important as a customer! Thank you Chuck!
– Kali D. (Google Review)

The team at MEI is the best.
– Adrian S. (Google Review)

I’ve been working with Chuck Pilz and the MEI crew for a little over 2 years. Best elevator service in this town. Whether it is during regular business hours, after hours, weekends, Chuck answers his phone and will assist our company as best as he can. I would recommend MEI to any company having issues with their current service provider.
– Anshul Sathyan (Google Review)

We switched to MEI after less than stellar service with another provider. I must say it was a good move. Their service is great! They keep our units up and running with monthly maintenance, fast responses and immediate resolutions when there are issues. All technicians are very knowledgeable and polite. Best yet they come in on budget.
– Lou Cook, Lutheran Senior Service – Laclede Groves Campus (Google Review)

I spent years working with the same company. As time progressed issues became more common. We decided to give MEI a shot at a mod project and they blew the competition away. After things went so well on the mod project it made sense to give them a shot at our maintenance contract. Chuck and the crew have not disappointed us. Our units are up and running smoothly and have never looked better.
– Michael Robertson (Google Review)

Great service! Honest reliable service for you elevator needs. I have been working with MEI for a year and their customer service is fantastic!
– Kyle Bozoian (Google Review)

MEI recently took over the elevator service at our high rise – after years of dealing with a horrible company that lied and lied and would leave our elevators down for weeks at a time – we finally made the switch to MEI. They have been nothing short of amazing. The staff is extremely nice (the elevator controls are in my attic space so I talked with them quite a bit), they always showed up when they said they would, were super respectful of my home and managed to get multiple things fixed on our elevators in RECORD time. These guys are wonderful.
– Josh G. (Google Review)